An expert by accident.

I never set out to become a niche blogger. Yet, here I am, writing to you, the reader, about specific topics that probably only interest a few million people on the planet.

Every time I go digging through Ahrefs, I am blown away by the sheer amount of intent-based keywords that are easy to rank for (and don’t have a clear winning top result) across any niche you can possibly imagine.

I’ve done it so many times. I go into Ahrefs with an idea about a topic that I would be interested in learning more about, and I come out with so many more ideas for things I could research further. The internet is a vast, vast place.

How many of these ideas can be turned into profitable internet businesses?

Writing and blogging don’t just turn words into cash. There has to be some exchange of value. You can either charge for the words on the page, package them as a book, point the readers to products mentioned (affiliate), or sell your own products that are talked about in the content.

Or, if you’re an expert, you can sell digital courses that are a deeper take on the topics you discuss. Charge a premium for access to the man/woman behind the curtain.

The best way to use ads, is to get a sponsor. A company that wants access to your users and/or your email list. In this way, the more emails you can capture for your niche audience, the more that business will pay you for access.

Since there are so many ways to make money online, I would argue that just about any niche has a chance of making money online. The majority of the determining factor lies in market demand and market growth. If you’re ahead of the curve, the wave will drive all of the traffic to you.

Earlier this week I sent out a tweet, saying I wanted to take a blog to 1MM annual visitors.

The only thing is, I can’t figure out which niche I should tackle (there are so many).

I recently purchased a Google PixelBook, which is a niche product in-and-of itself, but I could certainly do a Chromebook based blog. Anyone else in the space doesn’t even seem like they know what they’re doing (it’s all news and hype, not evergreen content).

That would be fine, and I would probably monetize using affiliate links. Not massive money, but it would still be fun.

Google Chrome as a whole would be a good niche, since it has over 1 Billion users, but I don’t exactly know how I would monetize. Maybe a (or several) chrome extension(s)? That would be interesting, and right up my alley of skills. 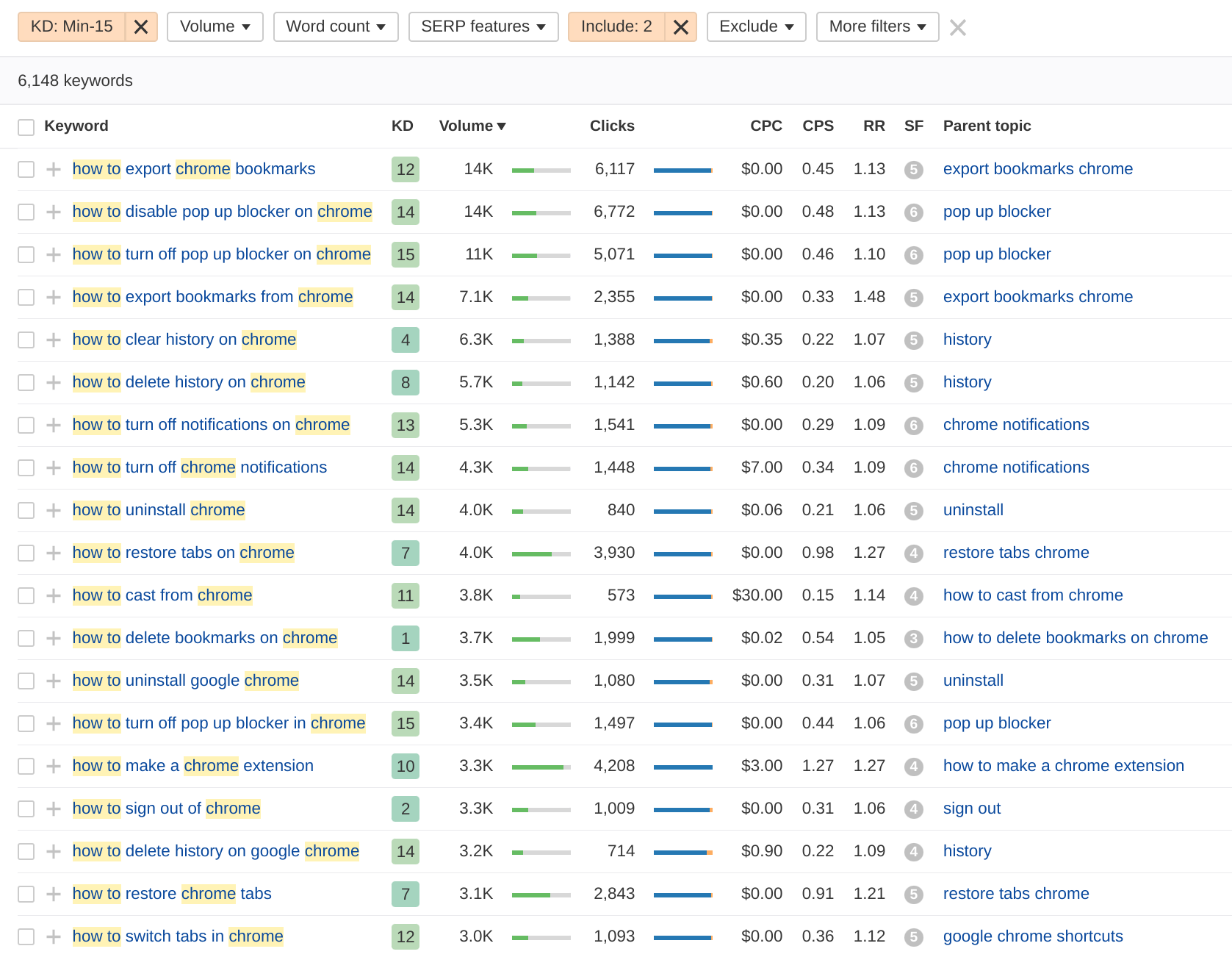 The screenshot above is simply a list of the top keywords in Ahrefs filtered by having the words “how to” and “chrome” in them. Oh, and it’s filtered to be a difficulty of 15 or less. It’s roughly 100,000 searches per month in traffic.

What’s not in the screenshot are the thousands of keywords that have less traffic, which is what I would be going for. They have essentially no competition. It would be incredibly easy to make something, put it on the internet, and see results.

But, ranking for these terms can help boost your SEO standing with Google, so you can rank for more competitive product intent based keywords.

It’s not about the first blog post you write. It’s about building up enough weight and clout on the internet. Then, when you write something, Google listens and ranks accordingly.

I could spend the first half-year, writing upwards of 3 or 4 blog posts per week, on keywords like this. Then, I could turn it around and start a product reviews based site (with affiliate revenue) or I could make chrome apps, or both.

This is something I would really enjoy doing. I love to code, but I also love to write (and be an expert, and teach). To be able to build an audience based on my expertise and see consistent traffic to something that interests me would be so much fun.

Running a SaaS product is totally different than being a content engine. There’s a lot more at stake, and it’s more risky. Being able to consistently bring in traffic and make revenue simply by people showing up and clicking links is pretty reliable (though, not as lucrative unless you get gobs of traffic).

I’ve already written about what I would want to be an expert in (as a topic) that could feed my content selection.

Basically, it came down to: Christianity/Faith, Firebase, Tech Blogger, and what this blog is (indie SaaS stuff).

I personally think tech blogger would be the most fun. Though, the thing that I probably want to become more of an expert in is Christianity/faith (more specifically, the Bible). I suppose I could do both, but that would be a lot of work.

I’m not afraid of a lot of work, but I would like my efforts to be successful. I know I would be spread thin if I had too many projects going at the same time.

What I would like to do is make the project a little bit more self-serving. I know that Hannah (my wife) wants to run a bullet journal / watercolor / lettering blog. I could very, very easily do something incredible in that space. It’s totally untapped, and there are so many products out there for creators in that space (thinking affiliate revenue).

She has a knack for making cool stuff, and I could direct the path of the content using the keyword research.

Yeah, that’s what I’m going to do (I’m figuring this out in my head as I write it). I want to use my wife’s talent as an artist to be an SEO experiment. It’s something that most SEOs can’t even compete on, because they don’t have the content.