Taking a look at why growth stopped for December.

December was not a great month for the Closet Assistant. 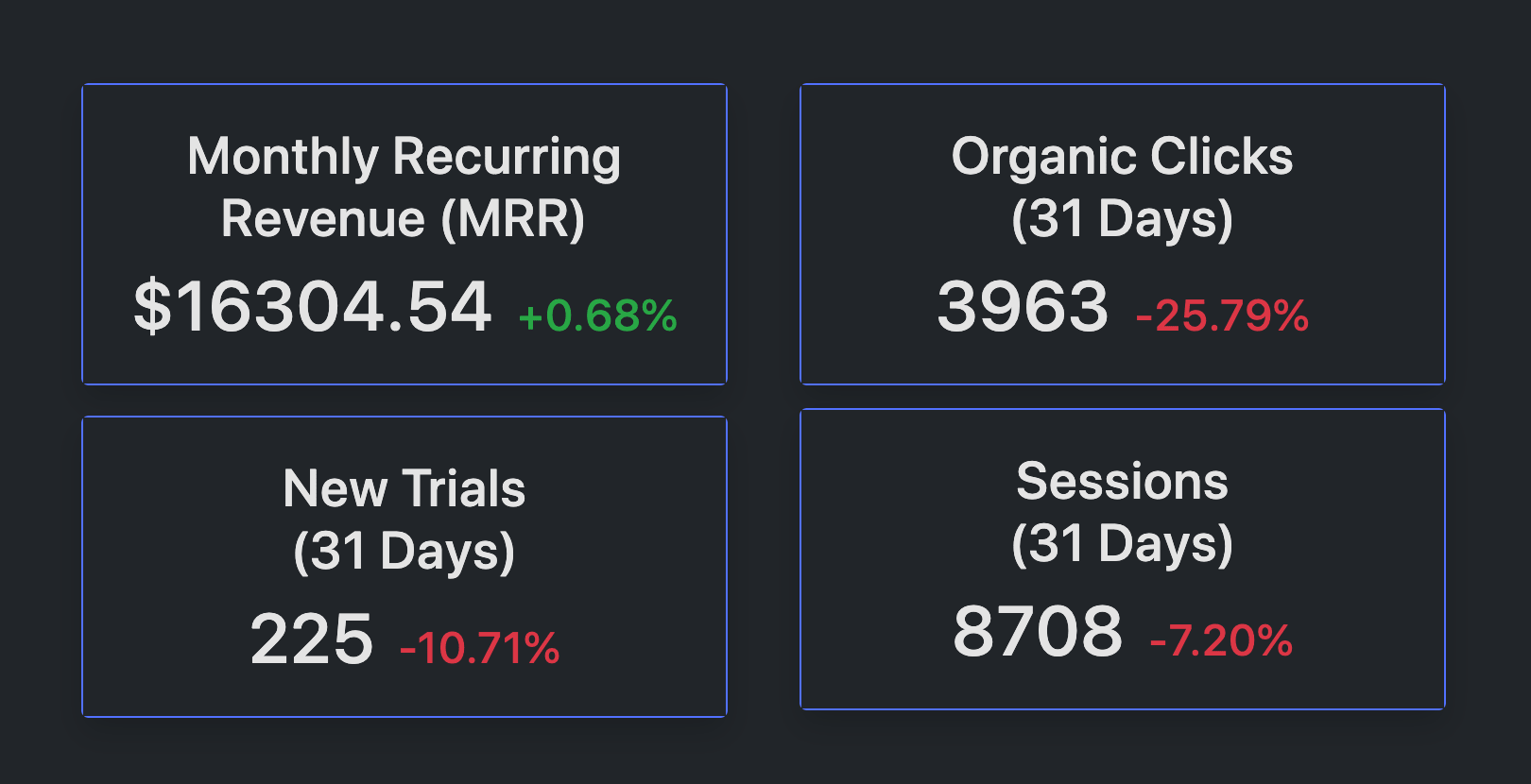 Growth is down, search traffic is down, and free trials are down.

It’s not all bad - the revenue is still up from a month ago, but not much. Typically, the product has been growing at a rate of $1k to $2k MRR per month. This month it was just $300.

And obviously, I’m still making plenty of money to be able to support my family. Nothing is on fire.

Here’s the main reasons why that happened:

Not that my personal life matters too much, but my wife (Hannah) is pregnant! Baby #3 is on the way, and we’re super pumped.

However, with Hannah’s last three pregnancies, the first trimester is pretty tough. Extreme morning sickness pretty much renders her bed-ridden for a month or so.

That month happened to be November.

So, during November I didn’t do any work. I watched the kids all day, and cared for Hannah when she needed it. I was cooking food (mostly buying pre-made food), cleaning, taking care of the kids and managing the house.

It was pretty tough, and stay-at-home moms are way undervalued. Their work is incredible in shaping future generations, and their work never ends. Kudos to you, moms.

During that time I was basically doing minimal customer service. I have a chat interface on my site, and sometimes people email me. It’s not a ton of work, but it’s enough to be just about all I could do during that month.

It was also my first month of full-time self-employment so I didn’t have a routine or really any idea what I was doing with my time.

Thankfully, Hannah’s doing much better now and is able to take care of the kids in the morning while I work. It’s awesome to have that commitment and support from her.

Having no new features, no new content, and no email newsletters talking to customers resulted in some stagnation.

This one hurts. It’s something I should have been doing all along, and I have been ignoring it.

Since around August, I was transitioning out of my job and into full-time entrepreneurship. This resulted in some changes to my routine that made it harder to get my business work done.

I had some loose-ends to tie up at work, and lots of other responsibilities. I was barely scraping by. I just needed to get to November so I could quit and work on the business full-time.

That’s not really a good excuse, because had good routines and habits been in place I would have had plenty of time to do the extra work I needed to do.

But, that didn’t happen. So, my SEO has taken a hit as a result. It didn’t stop, but it certainly stagnated.

Since my business relies heavily on SEO (Traffic from SEO results in free trials which results in conversions), I need to be writing content consistently.

It’s not about launching new content and getting small spurts of traffic - it’s about the aggregate content machine covering all of the different things my customers are searching for.

Finally, in December, I pumped out one new blog post (it only took me a few hours). It’s not the best post I have ever written, and it’s not going to bring in significant traffic, but it at least broke the silence on my end.

It’s already starting to bring in clicks to my blog. Which is another sad reality that if I had been writing content all along I would be way farther ahead than I am right now.

This one took me by surprise.

I’m not the greatest designer, and I write all of my code in pure JS and CSS, so I don’t use and frameworks to mask my lack of design skills.

Up until mid-December, the app didn’t have any scrollable tabs. If you want to see what it looks like - head over to this page (it pops up in the bottom left). You can see what I am talking about with the tabs.

Because it didn’t have any scrollable tabs, all of the features were in sight and above the fold. The user just had to switch tabs to use other features.

Well, in December I added a bunch of settings and features for my higher-end users (customers using my tool to make several thousands of dollars per month on Poshmark).

When I added those features, the app got super cluttered. I have a strict width constraint on the app, because it has to work on the old iPhone SE (which is 320px wide). So I had to make the app scroll.

Making the app scroll within the tab drove several of my customers crazy.

I don’t like to stereotype, and this isn’t the case for all of my customers, but the majority of my customers are older women. Very often they tell me they don’t know how to use a computer, and that my (what I think are simple) instructions are too difficult to follow. It’s a constant battle.

Anyways, when you change something, move something, and make things different from the way they used to be, they have no idea what happened and how to get back the things you changed.

There were a few different settings that people use often that were now below the fold. I had at least 20 people ask me where they went. And at least 10 of them claimed the tab “didn’t scroll” (though after a few minutes with all of them they figured it out).

I definitely lost some customers, because instead of emailing me and figuring it out, they just quit because they thought the features were removed.

So, the moral of the story is, if you make large design changes you need to properly educate your customers as to what changed and how they can continue using the product just like they did in the past.

Don’t assume they will figure it out, and don’t assume you know best when it comes to design. The best design is the most simple design. By adding scrolling, I added an additional step for the customer to do the things they normally did. That’s a small change for me, but a big change for others.

This change also took me by surprise. I didn’t realize how the holidays impacted my SEO traffic. Last year I didn’t have a significant enough amount of traffic to notice the dip.

In November, my organic traffic spiked to an all-time high of 237 clicks in a day.

By the time Christmas rolled around, my traffic dropped to a low of 80 clicks in one day.

That’s one third of the traffic I normally get.

One thing you can also see, is that right now my traffic is back on it’s way up. Now that Christmas is over, people are getting back to their normal routines.

Here’s a look at my free trials over the last 6 months.

Here’s a look at my organic search traffic over the last 6 months.

You can see the trends are directly correlated. Around the end of October and beginning of November my organic traffic and free trials peaked. After that, you can see both of them start to trend down.

There’s some things I can change for the future that will help mitigate these issues with growth.

Having well-defined and consistent routines of work and progress will always beat sprints of work and taking long breaks.

Though November was mostly unavoidable, there are a lot of things I could have done to get an hour or two of work in every day to make progress with my product.

Getting to bed on time, getting up early to work, being diligent about keeping up on house chores and keeping routines consistent for the kids would have allowed me the flexibility to work when I needed to.

Writing more is one of my core goals for 2020. Writing is the most productive thing I can do with my time, and it’s something that directly impacts the performance of my business.

Writing new content consistently is critical to the success of my product, and it’s the major thing that keeps me progressing forward as a human being.

Depend less on Google

I normally am the person in the room who thinks that good SEO solves all of your traffic problems.

Well, it certainly makes things easier, but there’s a little bit of a problem with that.

When Google is in control of your traffic, what do you do when that traffic dries up? You don’t get to decide what traffic Google gives you.

This problem can be solved with ads, social media marketing, and building an email list. Having an audience of people to reach that’s not exclusively on Google search will help me avoid any traffic dips in the future.

When I make major changes, I need to communicate that effectively with my customers. That could be an email, with a video outlining the changes, and maybe even a detailed walkthrough of everything that’s different.

I can’t assume they’ll know how to use my app. User experience is crucial to the success of a product, and if the user experience is sub-par, then your customer will use a tool that is more simple or performs better for them.