How I realized the market is always right, and I have no idea what I’m doing.

Years ago I was very public about my company’s metrics. Revenue, traffic, etc. were all on display. Things were great. Everything was up and to the right.

But then, things started going sideways. Sideways, not in a horrible way, but literally sideways. All metrics were showing a plateau.

Then, they started slowly moving down and to the right. I was less open about sharing stats. I was embarrassed. Maybe I wasn’t as good at business as I thought I was.

This was odd, because I wasn’t doing anything different than what I was doing before when it was growing rapidly. In fact, there’s a ton more value in the product today than there was years ago, and the price hasn’t changed. Why would things be different now?

Almost a year ago I speculated in a blog post and I mentioned a lot of things I did differently that may have caused this.

There are a few reasons it stopped growing so much - I relaxed on marketing, a few competitors popped up with influencer backing, and my documentation didn’t properly keep pace with the features I have been shipping out. I have been increasing the value provided to customers without charging more. The onboarding flow got more confusing and less simple. The more I do that, the more I pay out of pocket per customer.

Ha. Hahaha! I’m so foolish. Did I really think I was that powerful?

After an entire year I finally realize the truth. The truth is I’m not in control of anything other than being an available product on the market, and working to increase my distribution (SEO presence, and my email list). How the company performs as a whole is dependent on a bunch of other things which are out of my control.

Risks you take when building for a platform

If you build for any platform, you are limited to the trajectory of the platform.

Instead of only telling you this, let me show you.

Now, here’s a look at Poshmark’s performance after going public: 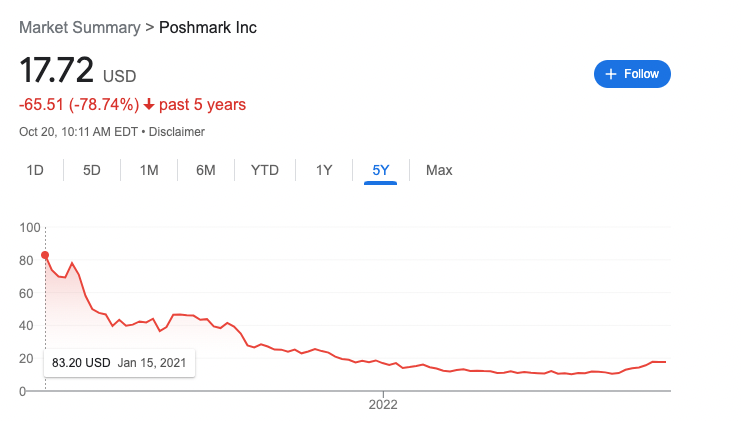 Interesting! As soon as Poshmark went public, Closet Tools started losing customers. There are three reasons for this:

Poshmark went from being a reselling darling to being a mediocre business overnight. It’s all because of how the executives ran the company. It wasn’t great. Despite record eCommerce traffic and sales during the pandemic, Poshmark flopped.

But, oh, have a look at this. Poshmark recently announced they are going to be acquired by Naver. They also recently had PoshFest 2022, where they announced many new features Poshmark sellers have been asking for.

Very cool. Now, take a look at their stock performance in the last month: 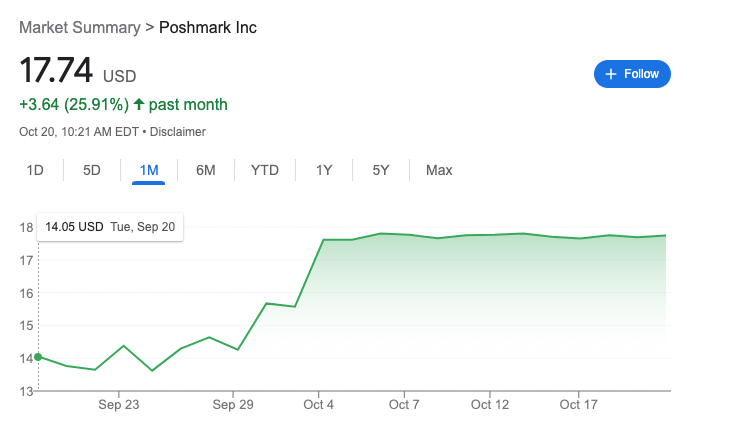 And have a peek at Closet Tools’ stats for the last month:

Interesting. Things are trending back up. We’re back at a plateau! Much better than falling into the abyss. How good it feels to finally plug up my leaky bucket.

Here’s the final kicker. I have not pushed a single update to the app in two months. No new features, and one new blog post. Nothing major (though, I am working on some cool new features).

So, how much control do I really have? Turns out - not much at all. It’s a good thing and a bad thing. The good thing is, as long as the market does well, I do well. The bad thing is, if the market is downturning, there’s not much I can do about it.

If I have no control, why do I do anything at all?

Good question. You could look at this and be pessimistic or optimistic. You can ride the wave, or watch the wave from the sidelines.

I know I can provide value for other people. Whether or not people need the value I provide is determined by things outside of my control. The only control I have is I can make some amount of value available for anyone who would like to purchase it.

If you decide to build your own platform, understand you are at the mercy of market demand. You have the advantage of making market impacting decisions, but you also have the disadvantage of shrinking demand for the market you serve.

There’s risk in all business. There’s risk in employment too. It’s up to you to evaluate the risk, and adjust when necessary. You don’t have to be a one-trick pony. You can iterate, backtrack, grow, and learn.

My recommendation is to provide the most value you can in the most sustainable way possible and let the chips fall where they may. Some people become billionaires. Some people live modest lives. But either way, you should work hard to give back to the world in a way only you can.

That’s all for now. See you in the next one.